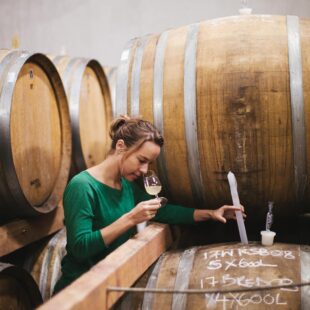 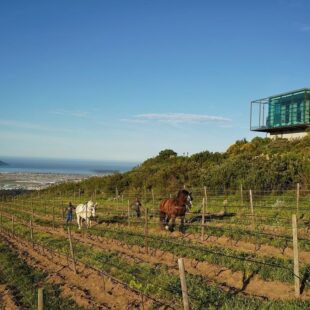 Founded by Paul Boutinot in 2004, Waterkloof is a family-owned farm using organic practices. The farm is perched high up on the windswept Schapenberg, overlooking False Bay and The Atlantic Ocean. Living soils, naturally low yields and a long growing season help provide talented Cellarmaster Nadia Barnard with naturally balanced grapes that are imbued with a truly defining sense of origin. Those grapes are then transformed into wine with a minimum of intervention. The resulting wines are fine, inimitable and best enjoyed with food.

As well as being ECOCERT certified as organic, and working biodynamically, Waterkloof goes much further than many in its efforts to be a highly sustainable winery. A member of The Integrated Production of Wine Scheme, a voluntary environmental sustainability scheme established by the South African wine industry in 1998, and of The Wine and Agricultural Ethical Trading Association, a multi-stakeholder, non-profit voluntary organisation which actively promotes ethical trade in the wine industry, it is has also been a member of the World Wildlife Fund’s Biodiversity & Wine Initiative from its inception. Through a partnership between the IPW and the BWI, Waterkloof is a WWF Conservation Champion and has in place a formal nature conservation plan that includes: clearing approximately 55 hectares of land from alien invader species and restoring the Cape’s precious indigenous flora and fauna; re-establishing natural vegetation in previously disturbed areas; introducing preventive erosion control measures; providing migration corridors for species between isolated areas of natural vegetation; mulching of winter cover crops to create a healthy environment for the natural predators of vine pests and installing perches for birds of prey for natural rodent control measures.

In the vineyards, drip irrigation is used only on young vines as a more efficient system to conserve water. Most of Waterkloof is dry-farmed; the biological control of pests is employed as an alternative to chemical spraying; annual legume cover crops are sown to add nitrogen to the soil and annual grain cover crops are sown in alternate rows as a carbon source and to return nutrients to the soil; earthworms are farmed and their casts are used to make a tea, which is used on the cover crops and soil as a living fertiliser; 380-400 tons of compost a year are made each year to boost carbon matter in the soil, to enhance its water holding capacity, and to boost the level of microbes in the soil keeping it fertile and alive; and, as part of the estate’s biodynamic regime, various foliar feeds are made. No damaging herbicides, pesticides or fungicide are used, only natural predatory fungi and metabolites to control mildew and to build the plants’ immunity. Six Percheron horses are used to plough, compost, spray and harvest the vineyards to reduce damage to the soil and vines and to reduce carbon emissions. Using the horses also teaches the handlers the rare skill of training these horses. A flock of chickens reduces the number of pests in the vineyard and returns nitrogen to the soil and compost, as well as providing fresh, free-range eggs for the restaurant. A small herd of cows is kept, which is key to producing biodynamic composts and teas, and a flock of sheep and a herd of goats are allowed to graze in the vineyards in winter to naturally reduce the level of weeds and vegetation between vine rows, as well as to put nitrogen back into the soil.

Winemaker Nadia Barnard is one of many women showing they are a force to be reckoned with in South Africa’s winemaking industry.

After spending five years as an assistant winemaker at Waterkloof Wines since its inception, Nadia Barnard graduated to winemaker in 2013. She had aspirations of being a winemaker since high school, and studied a Bachelor of Science degree in Agriculture specialising in Viticulture and Oenology from the University of Stellenbosch in order to pursue her dream. After university, Nadia gained extensive experience as a burgeoning winemaker through an internship at Vergelegen Estate and a stint at Flagstone Winery. She has also worked in South Australia, New Zealand and France where she continued to hone her high-quality winemaking skills internationally. At Waterkloof, Nadia attributes her high-quality wine to “meticulous care and guidance” in her biodynamic farming procedure which utilises natural winemaking.